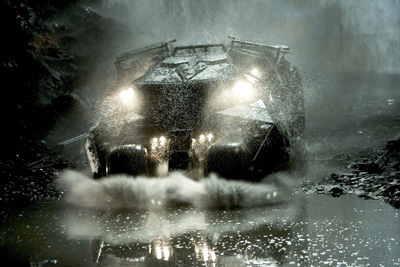 Claim: The Tumbler from Batman Begins was a capable stunt car

Origin: Movie cars have a reputation of being "all show and no go." CGI, camera speed, and other post-production tricks are frequently used to make cars appear faster, tougher, or more capable than they really are. As technology improves, the use of these techniques has become more common and the use of stunt drivers and stunt driving has declined. There are several movie makers who go against this idea, including the makers of Batman Begins.

Nathan Crowley has been described as a "staunch realist who wanted an actual, physical manifestation of the car" in the film. So he and director Chris Nolan started creating the Tumbler by building models of it. Crude clay modelling was done first, but this quickly transitioned into kitbashing once they had a general idea of what the car should look like. Six 1/12 scale models were built over the course of four months, leading up to a full-sized model carved from styrofoam. Crowley, along with a team of about 30 people (including engineers Chris Culvert and Annie Smith) worked for two months to carve a 1:1 scale model of the Tumbler (including tires & glass) to use for making the final panel molds and the steel chassis.

The chassis was used as a test bed to make sure the car was capable of doing what would be required for filming. Not only did it have to be able to handle speeds above 100mph and accellerate quickly (fairly standard requirements for any Hollywood car), it had to be able to handle well enough to maneuver through city streets at speed, and it had to be able to execute a 30-foot jump without damage. The first three requirements were met thanks to a high-output Chevy 350 V8, a heavy-duty drive train, and special brakes that allowed the drivers to stop each rear corner of the car seperately. Unfortunately, the first jump done with the test chassis didn't do as well, as the front end collapsed and needed to be completely rebuilt. The revised front suspension had a much longer travel (30") to absorb the landing impact, and once successfully tested it was deemed good to go into production.

Four complete, drivable cars were built: two regular "driving" cars, one "flap" car with working hydraulics for close-up shots, and one "jet" car with a fully funcional propane-fueled exhaust. The cars used carbon fiber body panels, and cost approximately $250,000 each to build. The interiors of all of these cars were sparse, with only enough to keep the stunt drivers safe and well-informed: this included side- and rear-view cameras in addition to the standard array of gauges. A fifth car was built as an "arrival" car. This one had a full interior and working roof to allow for shots that required actors to get into or out of the car. This was driven by a small electric motor, since it was only required to do limited low-speed travel. Two more "fake" Tumblers were built. One was a complete and detailed interior set, which allowed the actors and camera crew to fit "inside" the car. Also, a 1/5 scale Tumbler was built for certain jump scenes, such as the chase sequence across Gotham's rooftops.

So although there were multiple cars used for detail shots, the bulk of the driving was done by one of four nearly identical machines. These cars were really capable of high speed driving, quick cornering, and jumping (including the "entering the batcave" sequence, which had the full-sized car make the jump through the waterfall onto a reinforced concrete slab). The only post-production work needed to make this car do its own stunt work was editing the clips together into one sequence.