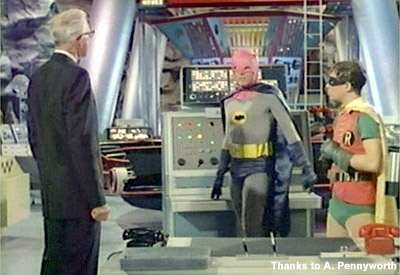 Claim: Multiple Batmobiles were used in the Batman TV series.

Origin: For years, the generally accepted idea was that the #1 was the only Batmobile to have been used on-screen. There were claims that the three Batmobile replicas built by Barris Kustoms were used for different filming requirements, but this was generally dismissed: the #1 was the only car ever seen. In September 2006, though, A. Pennyworth found & posted concrete evidence of a Batmobile replica being used during production of the TV series over at the 1966 Batmobile message board.

The replica appeared in the January 4-5 1967 episode "The Contaminated Cowl," in the scene where Batman is in the cave with Robin and Alfred and wearing the pink cowl. The car is almost entirely obscured by Robin and the computer, but enough of it is visible to see that the car is not the #1. As posted by A. Pennyworth:

"What I first noticed was the two large arch side lights (only seen in the replicas!) with the specific order of red/yellow from front to rear. Also the beacon slats are verticle and the beacon is cylinder shaped and not tapered. Also notice the afterburner exhaust is missing its 'burner box' which is visible and included in every new shot filmed of the #1 during this second season."

The general concensus is that this is either the #3 or #4 car, with a slightly higher likelihood of it being the #4. It can't be the #2, as the door bats, beacon, and other details don't quite match up correctly. The arch lights are wrong for the #3, but correct for the #4, while the exhaust nozzle is correct for the #3 and not the #4. However, the #4 didn't make it's dragway debut until five months after this episode aired. It's very possible that the final "drag" modifications such as the canopy holes and extended nozzle weren't installed on the car until after this episode was filmed and the car had been through a trial run or two. Which car it is exactly may never be known, but it has now been proven that a replica Batmobile was used as a stand-in during filming.