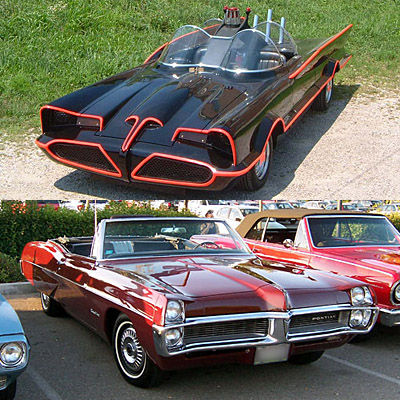 Claim: The TV Batmobile was built from a Pontiac.

Origin: One of the more common misconceptions about the TV series Batmobile was what the car was originally based on. One of the more stubborn candidates to show up in the list of possible donors is the Pontiac Bonneville or Catalina. Looking at the two cars next to one another, it's easy to see where the idea came from. The Pontiac has similar headlight hoods, a split grille, and a hood bulge that tapers into a point on the car's nose, much like the Batmobile. Without being able to compare the cars side by side, it would be easy to remember the features of one and ascribe them to the other.

A passing resemblance, however, is all that these cars have in common. The Batmobile's true base car, the Lincoln Futura show car, was built over a decade before the show aired. As such, it reflects a more 1950s aesthetic with rounded fenders, true fins, and a generally more "sculpted" appearance. The Pontiac, designed and built in the 1960s, has a much boxier appearance: rectangular grille openings, hard-edged fenders, no fins, and minimal contouring.

If nothing else, the Pontiac couldn't have been the basis for the Batmobile simply because it didn't exist yet: this was a 1967 design, and even if it had been debuted early it was still one year too late to have been used in the show. Instead, viewers who had been watching the show for months at that point (especially younger viewers) had committed the shape of the Batmobile's nose to memory and were thrilled to see a car that so closely resembled it on the road. In the years since then, the roles became reversed in many fans' minds and the Pontiac became the basis for the Batmobile.