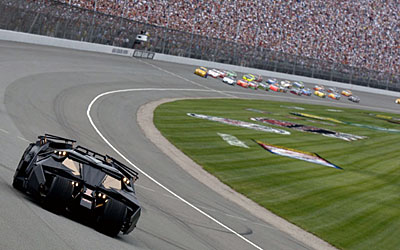 Claim: The Tumbler was used as a NASCAR Pace Car.

Origin: As part of the advertising campaign surrounding Batman Begins, Michigan International Speedway played host to the "Batman Begins 400" on June 19th 2005. It was the first time ever that a movie had sponsored a NASCAR race, and festivities included infield decorations, an appearance by Batman as Race Marshall (delivering the "drivers, start your engines" line), specially painted cars (Mark Martin's #6 Taurus for the Nextel race and Ricky Craven's #99 Ford in the previous day's Craftsman Truck Series race), and the Tumbler acting as honorary Pace Car. The Tumbler's duties for the day consisted of a parade lap at the beginning of the race, after which the pace duties (including all caution laps) were handled by the dedicated Chevrolet SSR Pace truck. The bright yellow SSR can be seen in the above photo in the distance behind the Tumbler, leading the field of cars.