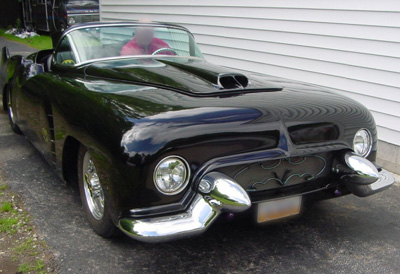 Claim: In 1954, a third Batman serial was made by Paramount Studios. This Batmobile, made from a 1950 Lincoln Cosmopolitan, was used as part of the production and stored with a local farmer while shooting took place. After filming wrapped, the studio pulled out and for one reason or another, did not pay the farmer. The farmer kept the Batmobile as payment, where it sat in his barn until a few years ago. That's when a curious Bat-fan stumbled across the car, and learned the history of the car and its place in the Batman universe. This fan made a deal to buy the car, and went on to restore/customize the car to its current condition.

Origin: Pictures of the above car first surfaced online back in 2002, along with the story about how this was the "Lost Batmobile," a pop-culture icon more than a decade older than the famous TV Batmobile. There have been a few variants of the story over the years, but an archived version of the original page that sparked the idea can be found here. Fans were quickly divided about the veracity of this claim: many dismissed it outright, while others not only believed the story, but offered their own claims of seeing the car in action on the screen.

However, no record of this serial exists. The cover story is that the only copy of it is damaged beyond repair at this point, so it cannot be re-released. This despite the fact that the earlier 1943 and 1949 serials are still around...as are stills, posters, and other memorabilia from them. Everything from this serial, save for this car, seems to have disappeared. Also, the idea of a 1954 serial is highly suspect. Television was taking over by the mid-1950s, and serials were on their way out. The few that were still around were generally Western and Jungle adventures - not superhero tales. The amount of time, money, and effort required to build such a radical custom as this for what was essentially a dead medium would not have been wasted by any studio, let alone one as big as Paramount. In fact, a major studio like that wouldn't have been doing serials at all: they were considered "improper," and were completely avoided by giants like MGM, Warner, and Paramount.

In addition to the concept being off, there are a lot of things "wrong" with car itself. The nose of this car is clearly Lincoln-based, while the rear half of the car appears to be heavily based on the early-fifties GM "Le Sabre" concept car designed by Harley Earl. This was a major amount of work, especially considering the time period. Car customizing was still in it's infancy, and radical customs built specifically for television shows or movies simply didn't exist yet (George Barris' first reported studio commission wasn't until 1958's High School Confidential). The car also seems to be far ahead of the curve both as a Batmobile (the central rocket nozzle, open top, and twin-headrest design wouldn't appear on a Batmobile until the 1960s) and automotive design in general (fender fins were a new idea inspired by the P-38s that flew in WWII, and the Le Sabre's fins were much smaller and more rounded than what appear here: the giant, sweeping "shark fins" like what are on this car wouldn't really appear from Detroit for several more years).

So why would people unconnected to the original story claim to remember this car? It is likely that people are actually thinking of the Le Sabre, and originally saw it as part of a news reel, or in a magazine, newspaper, etc. The car did recieve more than a fair bit of media coverage at the time (including celebrity passengers such as Dwight D. Eisenhower, Bob Hope, Dave Garroway, Stan Kenton and Margaret Whiting), and it's unique design probably left quite an impression on viewers. But as for the car shown at the top of this page? A cool-looking custom built by a fan and accompanied by a fun—yet entirely fictitous—story.