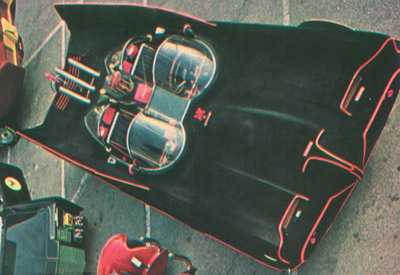 Claim: The TV Batmobiles were flocked for a time.

Origin: Much to the chagrin of many Batmobile fans, there was a time period when the Barris cars were covered with a fuzzy, velvet-like flocking known as "bat-fuzz." The material was added to all four cars after the show finished its run, and was rumored to have been used to hide stress cracks and other minor damage. In addition to the car show circuit, the fuzz-covered #1 also made appearances in the movie Galaxina and in the short-lived series Legends of the Superheroes. This time period was also marked by an exponential increase in the number of gadgets added to the Batmobile, many of which were done in a garish red to make the car more outlandish.

The fuzz was removed sometime in the mid-1980s, as were many of the extra gadgets, and the cars were repainted gloss black with new striping.