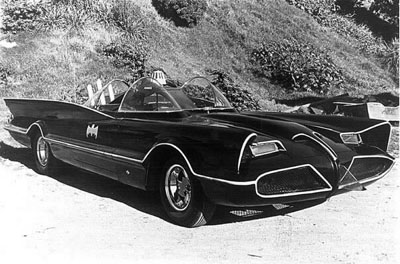 Origin: NOTE: this is going to be the "Reader's Digest" version of things, so if you'd like the detailed account (complete with tons of photos) you should head over to 1966Batmobile.com.

It's no secret that Barris was not only responsible for the original Futura-to-Batmobile conversion, but for a number of replicas as well. It was even stated specifically in his contract that "...BARRIS is authorized to construct such copies of the Batmobile vehicle as FOX and GREENWAY may approve..." The problem is that the exact number of replicas was not stated in the contract, and several factors over the years have led to an inflated number of Barris-produced Batmobiles, as high as seven cars by some counts.

First, a little background on the replicas. They were created in November '66, when requests for local appearances were pouring in from all across the country thanks to the show's popularity. The producers were eager to accept as many requests as possible, which was impossible for a single car that was already committed to duty as an on-screen presence. So a few "stand-in" cars had to be created. The replicas were created by making a mold of the #1, then using that to make fiberglass copies to be mounted on extended Ford Galaxie frames. Because of the way they were built, the cars share a number of features. For example, all three have tilt noses, limited interior detailing, and non-functioning trunk lids. At the same time, there are enough differences between them to make each car unique:

Any and all other replicas built since then are the products of customizers outside of Barris' shop. The most famous one, often called the "#5," has been the subject of much speculation over the years. It was a steel-bodied replica of the car built from a '58 Ford Thunderbird by Jim Sermersheim, who was bringing the car to local shows. The car was seen at one of these shows by Michael Black, one of the men who worked on the original Futura conversion. According to Black, he contacted Barris as soon as he saw the car, and shortly thereafter two Marshals arrived and seized the car. However, there have also been stories that the arrangement was far more friendly, and Barris either bought the car from Sermersheim or they otherwise worked out an agreement that allowed Sermersheim to keep his car for a time. Regardless of what happened during that period, the car eventually came to be owned by Barris, and was stored at his shop exposed to the elements for a number of years. The car was eventually sold to Bob Butts, who fully restored the car and sold it to Mrs. Scott Chinery in 1989.

The number of changes made to the cars over the years has added to the confusion: during the 1970s, many details & gadgets were changed or added to the cars, most notably the #1. These substantially changed the appearance of the cars (as did the velvet-like "bat fuzz" and subsequent restorations), leading people to believe that there were more cars. But, through it all, there were really only four "official" Barris-produced cars: the #1 Futura conversion, and the three fiberglass replica exhibition/show cars.