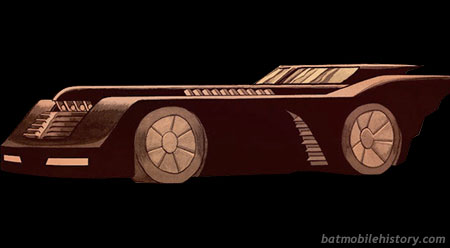 Unlike the previous All-Star imprint, 2016's All-Star Batman took place within the main DC continuity. It both told stories that took a deeper dive into some characters, and reintroduced some classic characters that may have been absent for some time.

"The Cursed Wheel" was one of the former, exploring Duke Thomas' training with Batman. As part of a long shot of the cave, this Batmobile is parked on the main turntable in front of the Bat Computer. The design is clearly an homage to the Batman: The Animated Series Batmobile, though it is a smaller car overall and has some altered details including the intake just above the grille and increased number of pipes on the sides of the hood.